Too Many Shoot 'Em Up Games 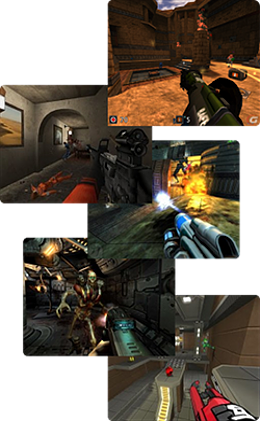 We have a few great Free Software gaming engines now, like DarkPlaces used in Nexuiz; Cube 2 used in Sauerbraten; Qfusion used in Warsow; id Tech 3 used in Call of Duty 4: Modern Warfare, Quake 4, Doom 3; soon id Tech 4 which is used in Enemy Territory: Quake Wars along with many others; and HPL1 used in Frictional Games' Penumbra trilogy series.

All of these engines have some combination of normal mapping, bump mapping, and/or parallax mapping -- where flat walls can look bent, dented, sticking out or poking in, just by using one or two textures. Cube 2 can actually render high quality textures and very large maps in a matter of seconds. Qfusion has nice cel-shaded graphics capabilities. And id Tech 4 and HPL1 actually have very nice physics capabilities.

DarkPlaces is based on the Quake 3 engine or "id Tech 3", despite that it has graphics on par with id Tech 4. id Tech 4 hasn't been "open-sourced" yet, it is planned to be released under the GNU GPL in 2011.

Three of these game engines (DarkPlaces, Cube 2, and id Tech 4) are always geared towards the same gameplay-style, you know, a gaming style similar to Duke Nukem, where you run around shooting everything in your way and occasionally a bit of story is thrown in -- a gameplay style I like, but don't love.

And this is what I want to talk about.

I like Quake and Duke Nukem, but I prefer more tactical games, like UrbanTerror, True Combat, Battlefield, Call of Duty, etc. However, most of these are proprietary games, which I don't have too much of a problem with, because I have no need to modify them for any practical use. But I can't help but be disappointed that developers aren't taking advantage of the advanced Free Software game engines, especially since most of the games mentioned above don't have versions for GNU/Linux.

There is good news, though, there are many differences between Nexuiz and Penumbra, for example: Nexuiz is fast-paced and has many weapons while Penumbra is slow, very strategical, there are no weapons but boxes, chairs, or whatever you can find, Penumbra's gameplay is based on a player's clever usage of physics and not a player's use brute force. For this reason I think Penumbra's HPL1 engine paves a very nice path to interesting gameplay styles, different from that of Quake, Doom, and Duke Nukem. And I think it's been the case for a long time that the Quake gameplay style died out long ago.