The proprietary game "Minecraft", which is written in Java, may have been inspired by Sauerbraten (also known as "Cube 2"). Minecraft is a browser-based first person "Sandbox" style adventure game where you can connect with other players over the Internet and build constructions out of textured cubes in a 3D world. This kind of game isn't new, in fact if you've ever searched the Internet for Free multi-platform first person shooters, you've probably heard of Cube 2: Sauerbraten.

Minecraft and Cube 2: Sauerbraten have a lot in common, if you put gameplay footage of editing a new map in both games in front of someone who has never played either, I think that person would think they are the same game, well, maybe without Minecraft's pixelated textures.

Minecraft and Cube 2: Sauerbraten both are based around the idea of building constructions out of textured cubes, this means stacking 3D cubes to make mountains, buildings, trees, roads, oceans, and many other things. Both are also available on GNU/Linux, Mac OS X, and Windows.

Minecraft and Cube 2: Sauerbraten are different genres, Minecraft is an adventure game while Cube 2: Sauerbraten is a fast paced first person shooter. Both are interesting takes on the old idea of building things like Legos in a 3D world, I'm glad to see this style of sandbox games is still alive.

I think of Minecraft as sort of like Cube 2 in the browser.

Here are some differences between the two:

Of course, Cube 2 isn't a browser-based game, so it's only natural it'd be graphically superior. Take a look and tell me if you think Minecraft or the earlier "Infiniminer" was maybe a little inspired by Cube 2... 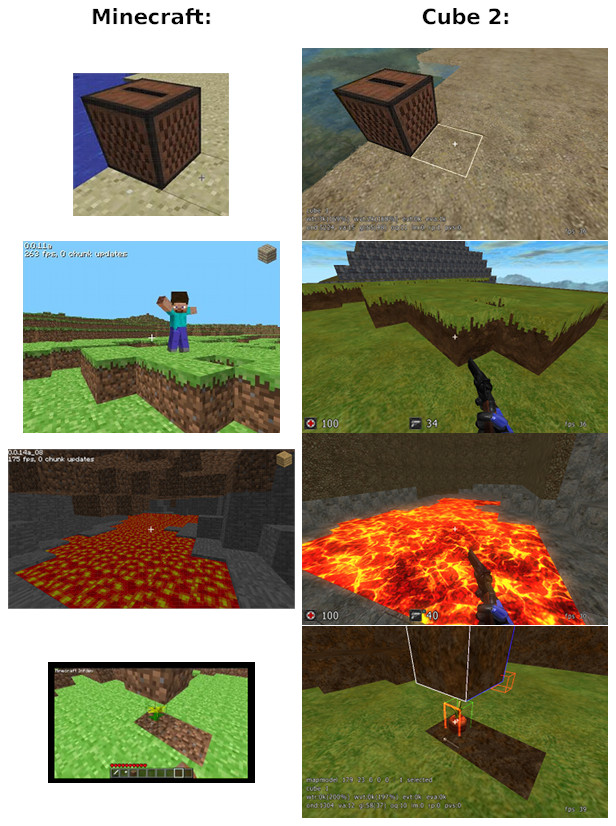 The Cube 2 examples are levels mimicking the Minecraft screenshots, built in the newest release of Cube 2, using only the default textures. I did, however, avoid using Cube 2's smaller cubes and the more advanced features, so that everything would be made out of single-sized cubes like in Minecraft.

It seems I'm not the only one who sees the similarities. A couple developers have been working on modifying Cube 2: Sauerbraten to act more like Minecraft, and to possibly use the Sauerbraten's map editor to import and export Minecraft levels. The developer has said "it is possible I could do a Linux version. I don't have a Windows machine, and have zero interest in that OS". Let's all hope this happens and that he doesn't take advantage of the permissive zLib Free Software license's lack of Copyleft, a Minecraft style game on the Cube Engine is a very interesting idea, but is useless software if made proprietary.