Below is a still image from the The Social Network official trailer, in it you can see what appears to be an old version of the KDE Desktop Environment. This particular still image is from a scene in the movie taking place in 2003, so KDE 3 would be an accurate version for the year. 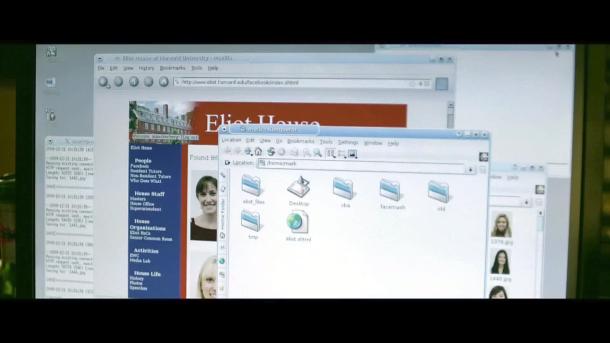 You can see a window open with the titlebar reading "mark@m" (the rest is covered by another window) which is normal for a Konsole window's title on a GNU/Linux system running BASH. Mine is "jake@jacob-debian:~$"

The first thing I noticed was the computer icon used in older versions of both the GNOME and KDE Desktop Environments, but this could just be a similar icon (there aren't many ways to make a computer icon.)

The third thing I noticed was Konqueror is also running on the system, Konqueror is available for Windows and Mac, but it isn't commonly used on either of these platforms.

And lastly, you can clearly see the windows are decorated with one of the themes available for KDE 3. Both GNOME and KDE copy some things from Windows and the Mac, design, icons, themes, etc, so this is possibly something that exists on another platform as well. It's definitely a Unix or Unix-like operating system as the Mozilla window's location reads "/home/mark", we can see it is also running the Linux kernel.

It is unlikely that all of these things would be combined exactly like they are on KDE 3 based distributions and the Desktop Environment not be KDE 3. And why wouldn't the founder of Facebook use KDE? Facebook.com is running Apache on a GNU/Linux distribution (Big-IP).

Of course, this scene is probably completely different in the finished film, KDE will likely be replaced by an Apple desktop, seeing as the characters are seen using Apple computers a couple of times in the trailer.

Either way, a possible mainstream mention of KDE or of GNU/Linux might make "The Social Network" worth seeing... on a bargain bin DVD... I mean, really, the film's about Facebook.