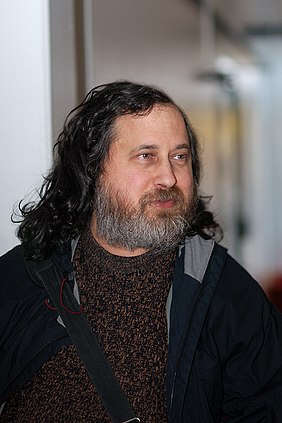 Richard M. Stallman (born March 16, 1953), often shortened to RMS, is an American software freedom activist and computer programmer. In September 1983, he launched the GNU Project to create a free Unix-like operating system, and has been the project's lead architect and organizer. With the launch of the GNU Project, he initiated the Free Software Movement; in October 1985 he founded the Free Software Foundation. Richard Stallman pioneered the concept of Copyleft and he is the main author of several copyleft licenses including the GNU General Public License, the most widely used Free Software license.

Since the mid-1990s, Richard Stallman has spent most of his time advocating for Free Software, as well as campaigning against both software patents and what he sees as excessive extension of copyright laws. Stallman has also developed many pieces of widely used software, including the original Emacs, the GNU Compiler Collection (GCC), the GNU Debugger (GDB), and many tools in the GNU Coreutils.

Here is my email interview with him.

Question: We often hear about how beneficial Free Software is to society; but how have you specifically benefited from Free Software?

Stallman: Thanks to the Free Software Movement, I personally have escaped from proprietary software. I am editing this text on a netbook in which all the software is free, from the BIOS on up. Instead of being the helpless "customer" of user-subjugating software, I'm part of a free community. I started the Free Software Movement so that everyone could have this freedom.

As yet, not everyone has it, but those of us who are willing to make a certain amount of sacrifice can get it. I would not normally use the word "benefit" to describe this, because that word seems to imply a convenience that one can do without. That's not adequate as a reference to freedom.

Question: What software, projects or movements are you most excited to see emerge?

Stallman: I think Diaspora could turn out to be an important advance. Beyond that, we need to make it possible to run a smartphone entirely with free software.

Question: With Debian Squeeze's separation of free firmware from non-free firmware in Linux kernel packages, and possibly not including the non-free firmware by default; do you see Debian becoming a fully free distribution in the future? And are there any negative implications with using Debian nowadays?

Stallman: To qualify as a free distribution, Debian would have to remove the references to its nonfree and contrib sections from its free packages and from its servers. (Many contrib packages serve solely to help install nonfree programs distributed separately from Debian.) As far as I know, Debian has no plan to do this. I wish it would.

Question: Many see Mono with its patent issues as possibly a big problem for GNU/Linux and Free Software; do you think using, developing and contributing Free Software written in Mono is better or worse in the long run for a user's freedom than using proprietary software?

Stallman: That's a comparison between growing apples and eating oranges. Instead of responding in those artificial terms, I will explain the issues of C# and Mono.

When you write a program, I recommend that you choose a language other than C#. If you write it in C#, then its use in the free world could be threatened by Microsoft's patents. So write in some other language, and avoid the problem. This is true whether your program is meant for release as free software, or meant just for private use as private software. (If it is meant for release as proprietary software, you should refuse to participate regardless of the language used.)

Question: Do you think it's time to start implementing Free Software alternatives for every proprietary web technology?

Stallman: Yes -- but this means more than just writing a free program to run on a server and do the same job as the proprietary program. We should write free programs that let users do the job on their own machines, or in peer-to-peer fashion. That's what enables users to have true control of their activity.

Question: What do you think of the major cellphone companies moving towards slightly freer software? Do you think it's being done in principle or as a mere practicality?

Stallman: These companies are not particularly concerned for our freedom, and that shows in what they do.

For instance, Android source code is free software, but many phones make the executables nonfree by stopping users from running their own versions. That's in addition to nonfree firmware and nonfree apps. Thus, it brings us closer to the goal of running a cell phone without proprietary software, but does not get all the way there.

There is more work to be done.

Question: If the Linux Foundation were to strongly advocate software freedom as the Free Software Foundation does; would calling the operating system "Linux" be as much of a problem as it is today?

Stallman: It would be less of a problem. Calling the GNU system "Linux" would still not be fair to us in the GNU Project; but fairness to us is not as important as respecting users' freedom.

At present, your choice of the name to call the system affects both. Torvalds rejects the goal of freedom for software users, and when people attribute the development of GNU/Linux to him, he uses his influence to lead them to devalue their own freedom. Giving the GNU Project equal mention will help give us equal influence to counter that.

Question: Today when most people hear "Free Software" they still think of price; do you think this will ever change, or if we need a clearer term like "freedom software"?

Stallman: I can't see the future. What I can tell you is that most people, after hearing "think of free speech, not free beer" a few times, understand the point.

We can't call it "freedom software" because that's the name of a company. But if you want to express the concept more clearly, there are ways to do it. For instance, you can say "free/libre software" or "libre software".

Question: Some complain of "bug regression"; what do you think is causing the development problems within Free Software?

Stallman: I haven't seen a problem, and I am skeptical of the claim there is one.

Question: Have you ever found yourself accidentally saying Open Source instead of Free Software, or Linux instead of GNU/Linux?

Stallman: I think I've made such a mistake -- once or twice a decade. If you make the mistake just as rarely as I do, you'll be doing a good job of showing your support for the GNU Project and the Free Software Movement.

Question: What are some of your favorite websites you fetch from day-to-day? Excluding fsf.org and gnu.org, of course.

Stallman: The usual way I look at web pages is by sending a message to an address that runs a script and mails me the contents. This works for fetching specific pages that people recommend to me, but not for browsing.

To actually browse, I need to make use of someone else's machine. I do that from time to time, but I can't view a site regularly that way.

However, even if I could browse a site daily, I couldn't afford the time to do it myself. I can barely keep up with the work I have to do. Instead I ask for volunteers to browse certain sites regularly, and mail me the articles they think I would be interested in.

Question: Where are you giving your next lecture?