Firefox 20.0 -- and a couple of earlier versions I think -- has a nifty little feature of its "Inspector" tool that allows you to view HTML elements as 3D objects. This lets you graphically see the DOM structure and how elements lay against one another. As soon as the feature appeared I knew what I wanted to do with it, I wanted to use it for something it wasn't intended for: 3D Modeling. 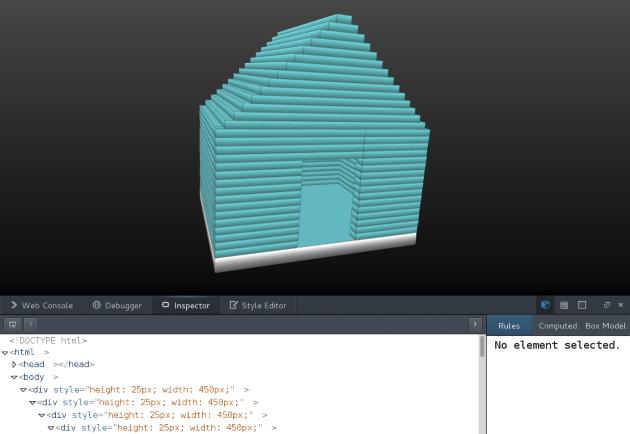 I'm kidding of course, but I still really wanted to create something as proof of concept. However, my talent and patience is very limited. There has to be a couple of clever people out there who can make something awesome show up in Firefox's inspector tool's 3D view. I know it's absurd and it's impractical, but it would be so cool to have some huge mansion or castle show up when people inspect a webpage in 3D view!

Take this for example:

UPDATE: Mozilla is set to remove 3D View from upcoming versions of Firefox.

UPDATE: 3D View is no longer available in Firefox 47 and onwards.