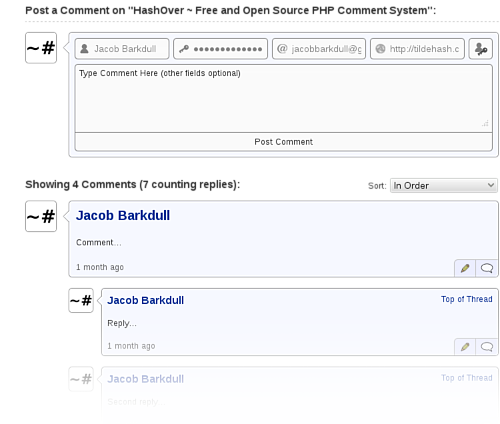 Say "goodbye" to Disqusting third-party comments with HashOver, a free and open source PHP comment system under the GNU Affero General Public License. HashOver adds a "comment section" to any website, with only a few simple lines of JavaScript or PHP code. HashOver is a self-hosted system and allows completely anonymous comments to be posted, the only required information is the comment itself.

No non-free JavaScript, non-free server-side software (software as a service), no account needed to comment, no e-mail address needed to comment, no storing comments on a third-party server, no IP address and user activity tracking, no ads, no heavy use of AJAX (JavaScript), no claiming of broad copyright on comments, no long load times, and no useless APIs.

To learn more I direct you to the links below:

Looking to the future:

HashOver was first announced in July of 2010, as a reinvention of Disqus, however, its development started March 29th 2009. Since its initial early developmental "release" it has matured enough for me to be comfortable making an official version 1.0 release and accept contributions. HashOver version 1.0 should be stable, reliable, and user-friendly enough for productive and constructive daily use.

HashOver version 1.0 consists of code written by one person over the course of five years, come March the 29th. Moreover, HashOver was my first serious use of JavaScript and my first PHP project of such complexity. Those two facts should trigger obvious concerns about HashOver's performance, efficiency, and security. With that in mind, version 2.0 will be the next release, and will focus on improving nothing but the following areas.

Getting involved and helping out:

For non-developers and users the simplest way to get involved and help out is by using HashOver on your website and reporting any problems you encounter. You may suggest new features or point out missing features and functionality. You may also help write HashOver's documentation and make tutorials to help other people use HashOver. Of course, Flattring this page is also appreciated.

For developers the simplest way to get involved and help out is by cloning the hashover-next branch on GitHub and addressing issues in the areas mentioned above.

PHP Web Server GUI - Version 1.0.0 Released
Today I am announcing the release of a personal project of mine. A GTK+ interface for PHP's built-in web server. It lets you choose the executable, IP address or hostname, port number, root directory, and INI file graphically. I have used this software for testing purposes for many years, since at least 2014.
HashOver 1.0.2: One for the Wingdings!

This is a bug fix release. It primarily includes fixes to problems many people have encountered using HashOver on Windows. There aren't any new features, as not even version 2.0 is focused on new features.

HashOver 1.0.1: The release that should not have happened!

This is a bug fix release. It includes fixes for problems many people have encountered and contacted me about since version 1.0's release, primarily PHP Strict Standards messages causing JavaScript syntax errors. There aren't any new features, as not even version 2.0 is focused on new features.